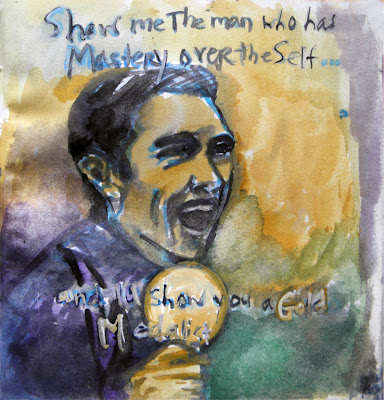 This watercolor came about after a night of watching the London Olympics. My roommate subscribes to the New York Times and there was a picture of Michael Phelps grinning widely and gripping his medal. Unlike four years ago, he didn't seem as happy and the world has shifted its focus. What to do when you've done it all? Last year at breakfast, a few of us were discussing ADHD. I mentioned that because Michael Phelps had it as a child, his mother threw him in the pool and now he's a gold medalist. A friend who's a psychoanalyst chipped in: "He still has it, you know." My mind raced to tabloid images of Michael smoking pot, perhaps easing an over-active mind when not in the pool? The friend went on: "I was almost in the Olympics, you  know, but what is a gold medal if you don't have a medal of the Self? Show me the man with mastery over the self and I'll show you a gold medalist." 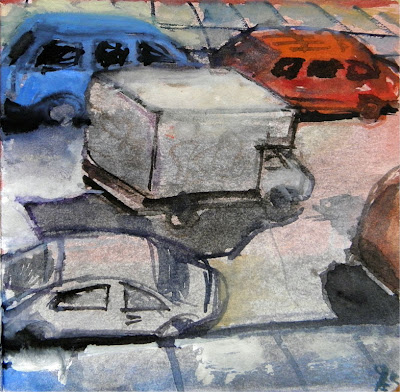 A tired afternoon spent reformatting images on the computer. I go outside to enjoy the sunshine. Only hours earlier I was soaking wet from a mid-day shower. Bedroom windows open to catch the breeze let in a pool of water, and some electronics need replacing. Funny how wetness seeps into you. I feel drained still. Looking down, I enjoy the shape of this truck. There is graffiti on it that I wish I had captured, for later that day in the Upper West Side, I see a similar truck...could it be the same one? 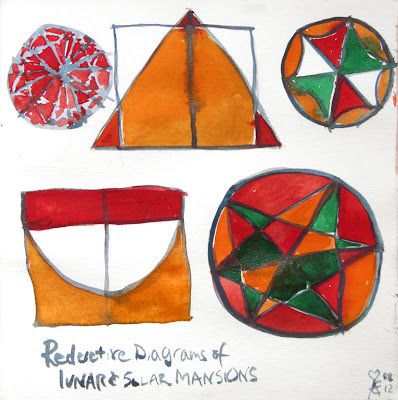 This one's for you, Kathy. Slowly, slowly I make my way through the massive illustrated texts of Ajit Mookerjee's "Yoga Art" and "Tantra Art." Some images are exquisitely elaborate, while others like the ones above, are sweetly simple, like the doodles made on the phone. According to Mookerjee, the solar and lunar diagrams "associate phenomena with metaphysical hypotheses. The kunda are a specialized system consisting of a series of interrelated divisions and subdivisions of the terrestrial and celestial spheres." (Mookerjee, Ajit, "Yoga Art," New York Graphic Society, 1975, pp.66)
Labels: APAD NY yoga art

Katherine Hamer said…
You know I love these Ariel! Thank you for your beautiful blog.
11:57 AM