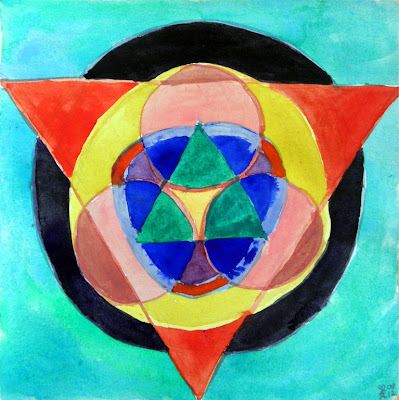 This piece is based on a seventeenth century engraving by Robert Fludd. The original contains writings in the different sections of the geometrical shapes. The outer triangle is female whereas the inner triangle is male in orientation. It resembles a sri-yanta, a yogic symbol of overlapping triangles which I will paint shortly. The sri-yantra also symbolizes creation, as brought about by the fusion of male (upward pointing) and female (downward pointing) triangles. More on this later. 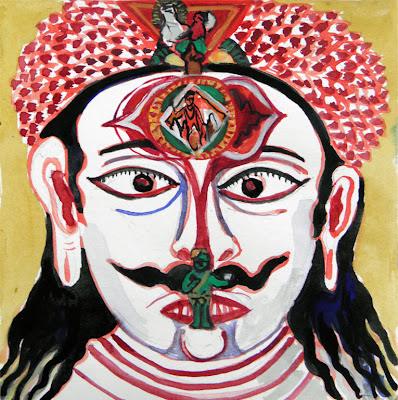 I love the expression on this guy's face, as if saying: "Who are you standing on my chin?" This piece is taken from a seventeenth century Nepalese scroll. The flower on the top of his head symbolizes the crown chakra, or our energetic connection to the divine. Many call this chakra, related to the brain center, "the thousand-petaled lotus." According to the description in the book, a yogi who has knowledge of the six chakras can awaken the dormant kundalini, or life force energy. When the kundalini is awakened, it "uncoils itself, and begins to rise upwards like a fiery serpent breaking upon each lotus as it ascends, until the Sakti merges with the Purusha in the Brahmarandhra in a deep samadhi or union."
(Mookerjee, Ajit, "Tantra Art," Ravi Kumar, 1966, pp.130) 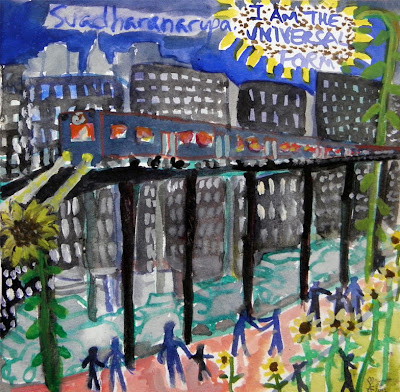 This quote was taken from the "Tantra Art" book by Ajit Mookerjee. The quote reads: "Svadharanarupa: 'I am the universal form.'" These words were the first image on the paper. Then, I began sketching the J train, which rises over Broadway avenue in my new neighborhood. Under the train tracks is darkness whereas on the platform, one enjoys a grand view of the Brooklyn and Manhattan skylines.  During a meditation last month, I imagined the neighborhood under the tracks filled with flowers. Actually, the raised tracks resembled Chelsea's High Line native garden on the raised tracks. Wouldn't that be wonderful? A park above Broadway? Since I am new to the neighborhood, I don't want to impose my dreams prematurely. Perhaps in a few years, the city will change its plans about the neighborhood: bring more light, more flowers and children-friendly areas to life! 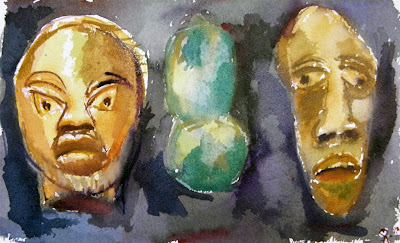 My roommate Alex subscribes to the New York Times: the real paper, not the website! The first page of the Arts & Leisure section caught my attention with these images. I have always had a fascination with African art. I confess I know little to nothing about it, but I wish to know more. All the hours spent studying Greek and Roman statues have made me hungry for ever more ancient, more elemental artwork. This article by Holland Cotter discusses the controversy over African art: many radical Islamist groups are destroying ancient tombs; ancient cities have been sacked for rare African artifacts which the countries are now demanding back; convincing fake African art floods the market; it is now illegal to sell or purchase art (such as the objects above) from certain African countries; Africa itself plays a dubious role in perpetuating the artifact market.
Labels: APAD mandala nature NY yoga art